How we Quadrupled Our Business During a Global Pandemic

When Covid hit in early 2020 the death knell sounded for live event companies in the U.S. and around the world. Once thriving companies came to a dead stop as live events were cancelled one after another in response to the novel virus and resulting pandemic.

“We wondered how we were going to get through it. Our world was going to change,” said Brian McCrae, Co-Founder of D3G Productions in Orlando which at that time had been in business for eight years and was successfully executing 12-15 large events a year with four full-time employees. “We ended up not having much time to think about it,” said McCrae remembering that D3G had a scheduled live event for a client on March 25, 2020, that was canceled two weeks before the event, yet the client still wanted to do something and looked to D3G to make it happen. “We made a shift to virtual in a rash decision so they could deliver something to their attendees on April 29 giving us basically five weeks to deliver a virtual event. We went from thinking the world was going to end to figure out how to deliver a virtual event with the level of service the client expected,” he said.

“We brought in Evolve Technology. They are the experts when it comes to video, equipment, and media servers.”

While other event companies were cutting staff and paring down, D3G decided to jump off a cliff and began writing checks. “We put everything on the line and hoped it would come back to us,” remembers McCrae. In the end D3G successfully delivered a virtual event with 7,000 attendees engaged in six hours of content that made such an impact on the client that the CEO tweeted that a new standard was set for the virtual world. 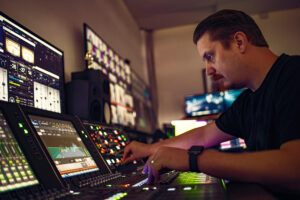 The phone began to ring at D3G. “Yet we knew there had to be a better way,” said McCrae referring to the scurrying rush in putting the first event together trying to figure it all out in only a few weeks. “We brought in Evolve Technology. They are the experts when it comes to video, equipment, and media servers,” he said. McCrae recalls what he calls “fantastic conversations” with a couple of the expert staff at Evolve who explained the different options available to help D3G execute the kinds of virtual shows that their clients expected. “They pointed us in the right direction because no one in the event world had done this before and we didn’t have access to multimillion-dollar broadcast studios,” said McCrae.

Evolve directed D3G first to the Disguise Media Servers. Initially, the company purchased a Disguise DX4 media server and then later bought another. They also bought a Barco E2 video switcher with EX sidecars to add more layers to the productions. The D3G team then trained on the equipment at Evolve Academy in Las Vegas followed up by continual support from the Evolve experts. “We can call them up and get their advice or opinion on something and they are always there to support us,” said McCrae. “We’re a partnering company with a business model to grow customers’ business,” explains Evolve founder Tyler Mayne. “If you want to purchase, rent, lease, and educate your staff we give customers 360-degree service.” “It’s kind of funny because Evolve’s name is so appropriate because we needed a starting point and ever since then it has just evolved into more and more and more,” McCrae chuckled. 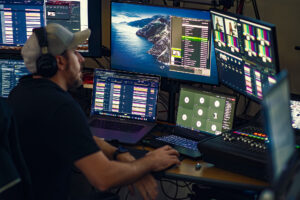 Now each time D3G clients request additional features in an event, D3G staff consults with Evolve to determine how to make it happen. McCrae lists the company’s capabilities since partnering with Evolve almost in awe at what the company is doing:

Mayne says he’s built a team of solutionists who are always looking at new technology. “We tell our clients that while they make their customers happy,  we’ll worry about technology, always offering new solutions,

creative ideas, and the most cutting-edge equipment.” With the help of Evolve, D3G has built full onsite keynote capabilities in a virtual environment. This technology feeds back into a Microsoft teams meeting giving the remote meeting planners real time program and preview views. This enables them to see what’s coming and who’s live on stage. From there everything gets encoded and streamed to the world. “Evolve is the linchpin of everything we do. I mean none of this was possible without their support and guidance in getting us to this place,” said McCrae. 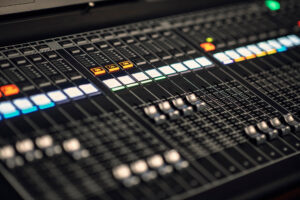 Hybrid Events the Path to the Future

While the country and world have opened up as a result of Covid vaccinations and lower infection numbers, people have become accustomed to virtual events. Going forward companies want to offer hybrid events providing the advantages of both interfaces. As a result, McCrae sees business only continuing to grow and the partnership with Evolve “not going anywhere.” “We couldn’t do what we’re doing without them,” he said, “There is no comparison to the Evolve team. They know what they are talking about when it comes to the equipment they sell and rent.” And it’s a good thing since D3G Productions has already executed 170 virtual events since April 2020 and is currently booked through April 2022.

D3G Productions executed 170 virtual events since April 2020 and is currently booked through April 2022.

“We know live events and we are 24/7 for our customers,” said Mayne. “If there is an issue during a live event, we can help solve it or bring a piece of equipment over if that’s needed.” When McCrae thinks about D3G scaling and growing he gets excited. “It’s comforting to know Evolve is there to support us. I don’t need to worry,” he said, “Evolve is my first call. I don’t call anyone else.”

Evolve Paves the Way with its New Long-Term Lease Program

Every once and a while we have some exciting news to share with you! Sign up for our newletter to be the first to know. We promiss not to spam you!