Leadership Conference in Orlando with Extensive Support from Evolve – Technology

“We wanted to keep things simple and not have a lot of different vendors, so we turnkeyed everything with Evolve.  They had the right players who easily understood what we were looking for and helped us achieve it.”

When Hilton planned its America’s Leadership Conference (ALC), an opportunity for select leaders to learn, network and celebrate the company’s 100th anniversary, it called upon Encore to create a memorable event experience at the Hilton Orlando hotel.  A global leader in event technology and production services, Schiller Park, Illinois-based Encore reached out to Evolve to support them with the quality equipment, expertise and value they’ve come to expect. “We got the show just 30-40 days out so we needed help from A to Z to make it happen,” says Dale Baer, National Show Producer/Technical Director with Encore.  “This was our first major partnership with Evolve since we needed a lot of additional support in a turnkey situation.  There were a lot of different components and the players involved grew as we got closer to the show.  We needed gear, people and a partner that didn’t require hand holding every step of the way.” 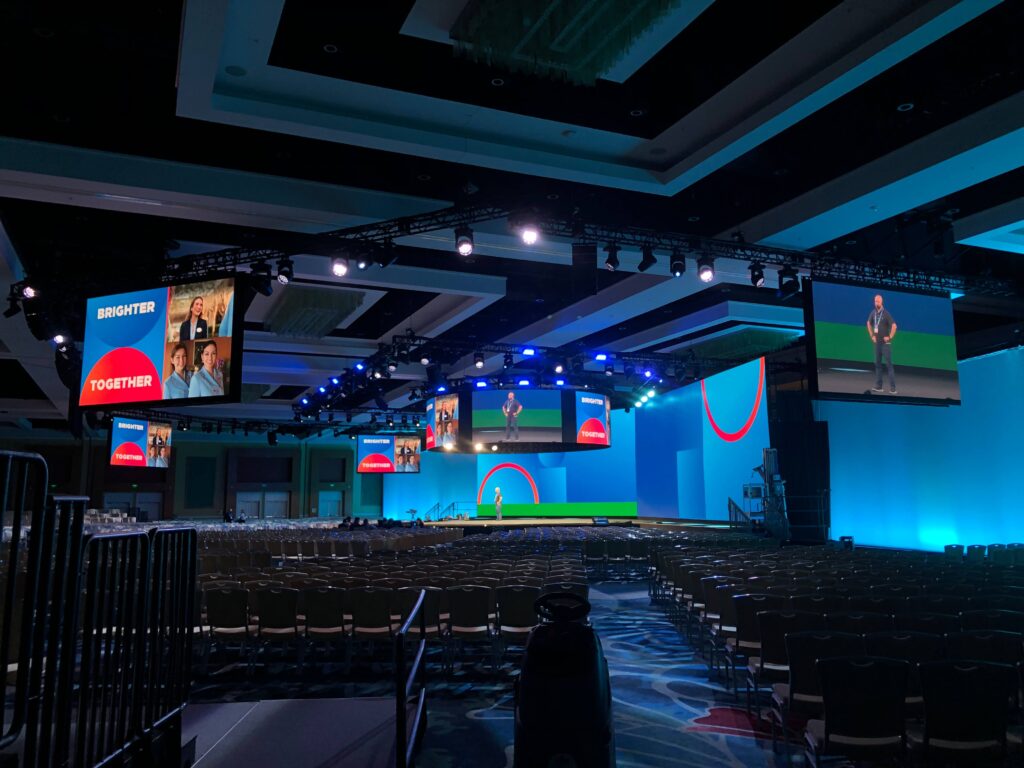 Evolve was tasked with providing equipment and on-site expertise for the Hilton ALC’s General Session in the Orlando Ballroom and Brand Sessions in the Florida Ballroom, which ran concurrently but the latter lasting one day longer. “It was serendipitous that we had just done a show for another client in the Orlando Ballroom and built an LED set with a similar orientation of stage and audience,” says Chad Thomas, Evolve’s East Coast Account Manager who served as Project Manager.  “When that show ended we were able to push all the equipment into a corner of the ballroom overnight then repurpose it for Hilton’s ALC with some gear staying in the ballroom and some carried over to the Florida Ballroom.  I used to work in logistics and, though it seldom happens, you always look for opportunities like this.  With most of the equipment already in place, we were able to hit the ground running on day one.”

Evolve has a reputation for stringent quality control at its warehouse.  To ensure the same kind of QC was observed in repurposing the equipment already on site Thomas and Bob Huskey, Evolve’s VP of Operations in Orlando, were on hand for the previous show’s strike.  “We were able to verify that everything worked well, met our high standards, was safely and efficiently stored in cases and transitioned over to Encore’s show,” Thomas explains. For the General Session stage in the Orlando Ballroom Encore requested an array of LED videowalls and displays to support speakers and presentations and guarantee that attendees had clear views no matter their location in the room.  “There was LED everywhere, so every seat in the house was a good seat,” notes Thomas. 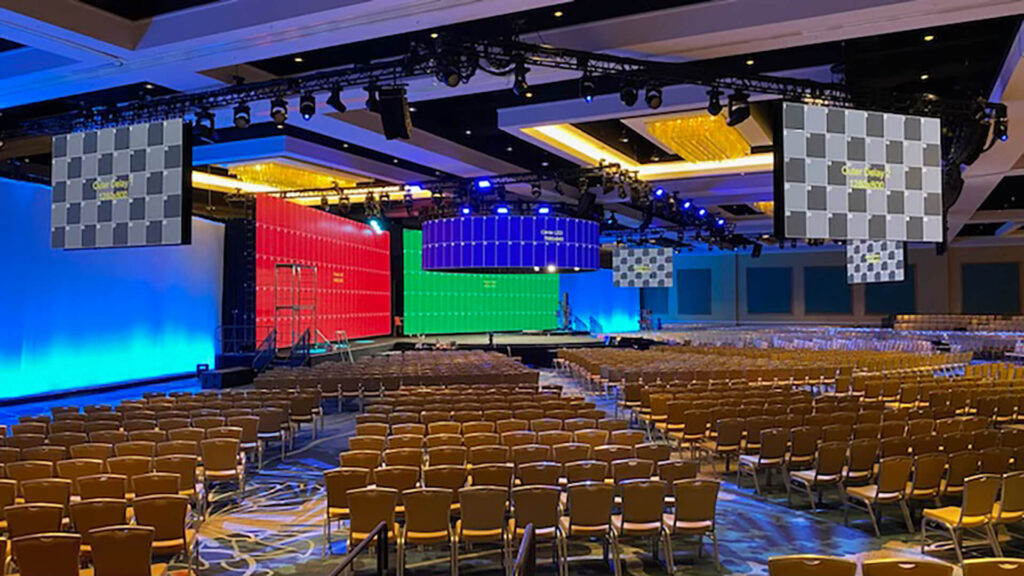 Evolve built two ground-supported Absen AT3 full tile LED videowalls at stage left and stage right measuring approximately 50’wide x 20’high each with a talent entrance between them.  Suspended over the center of stage was a 32-foot diameter ring of Absen AT3 full tiles with a circumference of 94’ feet and a height of 8 feet. Evolve supplemented the on-site inventory of LED tiles with about 400 more Absen AT3 full tiles for the General Session.  Every Absen AT3 Full panel Evolve offers was deployed in the two ballrooms. “Absen AT3 tiles were the best choice for Encore’s applications due to their versatility,” Thomas reports.  “The tiles have the ability to form concave and convex curves using special brackets so we could use them for the big flat screens and for the flown ring.” Evolve also provided four double-sided LED delay screens flown from 12” x 12” truss, which had to be cabled as they were built back to back since there was very little clearance between them.  The screens, comprised of Absen AT3 full tiles, were each about 15’wide x 8’high in size.  A center LED delay screen of the same dimensions was built from Absen M2.9mm tiles.

To turnkey the video equipment needs of the General Session Evolve furnished a package to handle image capture, switching and video playback.  Equipment included Panasonic 4K camera kits with Fujinon and Canon lenses, a Ross Carbonite Ultra camera switching system, Millumin loaded onto iMac Pros, and a large complement of 65- and 55-inch monitors for the video village, backstage client entrance and downstage. Although the Brand Sessions’ ballroom had a smaller LED video set it still posed challenges for Evolve and Lead Technician Jonathan Lively.  “The trim height in the room was lower than expected so we had to adapt to the situation,” Thomas explains.  “We needed rigging hardware that brought the LED videowall tighter to the truss, so Bob Huskey had the warehouse build seven new header bars with half couplers that bolted directly to the truss.  That meant when we attached the LED wall to the truss we’d be saving the precious height we needed.”

Three LED videowalls formed an innovative design on stage for the Brand Sessions.  The center ground-supported LED videowall, measuring about 23’ x 11’ ½” feet, was comprised of Absen M2.9mm tiles.  A smaller stage left wall was also ground supported measuring 11’5”Wx6’6”H. and flush with the bottom of the center screen; the same size stage right wall was rigged to the truss with custom half couplers and hung even with the height of the center screen.  Scenic flat panels filled in the walls’ offset spaces giving a unique mosaic look to the huge display that spanned the stage.

Evolve’s full-service approach not only encompasses a multimillion-dollar, state-of-the-art equipment inventory but also the knowledge, expertise and experience to deliver custom turnkey solutions to meet customers needs. While Evolve’s cutting-edge equipment arsenal provides everything clients need to run their shows smoothly, perhaps the biggest advantage that clients gain from working with Evolve is peace of mind. Renting from Evolve means direct access to every bit of experience and expertise the Evolve team offers.  Unmatched rigorous quality control ensures that all equipment is clean, labeled and sealed in a fresh zip-tied case ready to be deployed for the next project.  Events run seamlessly from start to finish with rental support from Evolve.

By partnering with Evolve on the Hilton ALC project Encore was assured of more than top quality equipment that met the depth of their technical needs for concurrent General and Brand Sessions. Evolve’s attention pre-show, during two long days of load in and install, ensured that everything was up and running when the CEO arrived to check on show progress. In addition, four Evolve LED engineers were onsite for the General Session and another one in the Brand Sessions ballroom which provided extensive customer support throughout the show. Evolve’s intimate knowledge of products and process also enabled them to offer Encore customized services like no other.  Evolve’s expertise with Absen LED tiles allowed them to quickly and efficiently build Encore’s uniquely configured screens and to solve unexpected rigging issues with custom-made hardware solutions.

Encore reports that the client thought the ALC was one of the best shows they’d ever done.  “Everyone was very happy, and we won their business for another year!” says Baer.  “We had a fantastic experience working with Evolve on one of the most challenging shows we’ve ever done.  They had a great team of knowledgeable and client-facing people.  I don’t think we could have pulled this off without them: They were key to the success of the show.” Baer notes that the extensive nature of the ALC project “gave us a chance to see Evolve’s full capabilities,” an important factor for future collaborations.  “This was a giant show, and we got to see Evolve’s process at work.  When we need this caliber of support again we’ll know to reach out to them.”

“When we partner with a client we provide a layer of service and support above and beyond equipment rental to deliver a turnkey solution that guarantees success for mission-critical projects.” ~ Tyler Mayne, President, Evolve

Evolve Paves the Way with its New Long-Term Lease Program

Every once and a while we have some exciting news to share with you! Sign up for our newletter to be the first to know. We promiss not to spam you!